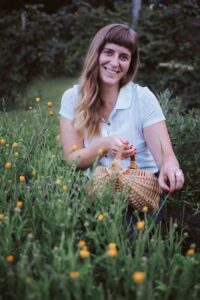 Evan (she/her) is a queer, cis-gendered, Jewish herbalist, birth doula, and creator of many things magic. She has lived in the mountains of Asheville, NC since 2008 where she has fostered a deep love and connection with these ancient mountains and the lessons they have to teach.

Evan grew up on the coast of Georgia, a place which still deeply holds a piece of her heart. Her mother introduced her to flower essences and homeopaths at a very young age, when she began seeing a healer named Beverly Holt. Bev later moved to Asheville where she began teaching Evan about flower essences and tapping into intuition. In early 2020, Evan had the privledge of supporting Bev through the portal of death, and she hopes to carry on her legacy as a healer and flower essence practitioner. Evan strongly believes in honoring those that came before us, taught us what we know, and inspired us to be the people that we are.

Evan’s passion for support, noticing the unseen, and slowing down, all deeply inform her work, her activism, her teaching style, and the way that she shows up as a doula and in her herbal practice.

When Evan is not at a birth or in the garden, you can find her dancing in the living room (or on the dance floor in another world!), drinking Japanese green tea, and snuggling her cats.

You can check out her website to learn more at www.bigcatbirthbotanicals.com