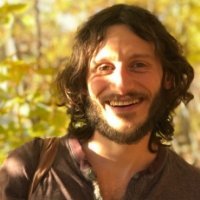 Frank (he/him) grew up in the hill country of the Allegheny Plateau of southern West Virginia. While in college in Shepherdstown, WV, he was elected to local government and became the youngest city councilman in the history of West Virginia. Since then, he has spent his life extensively practicing and studying temperate climate permaculture and agroforestry. He is particularly interested in nut- and fruit-bearing tree crops, perennial plant propagation, and ethnobotany for the homestead. He has created a small-scale germplasm with a significant amount of diversity of chestnuts, hazelnuts and pawpaws. He also loves sedimentary geology, mythology and astrology. He has a Leo moon, and his Gemini Sun is conjunct his Mercury.