Wild Abundance is nestled in the verdant folds of the ancient mountains of Shaconage (Sha-Kon-O-Hey, Cherokee language), the Land of Blue Smoke, known in English as the Southern Appalachians.

We acknowledge the many layers of human and greater-than-human inhabitants and relationships that together form our current home. They are all here with us now: people, stones, waters, winds, plants, animals, mushrooms, dreams and songs that came in the past, and those whose bodies remain. All of their stories hold us here in this place, as they continue to be told.

The original stewards of this land, whose bodies, cultures, foods, medicines, and languages grow their roots beneath our feet, are the Cherokee (Tsalagi, Ani’yunwi’ya, Principle People). They are who rightfully and legally claim this place as territory, and from whom it was stolen through illegitimate and broken treaties with the U.S. government.

Along with the people we describe above using the colonizer language of ownership, there are also other communities with ancient and different kinds of relationships with this land. One known example are the Catawbas who have always visited these mountains to gather and hunt for food, engage in trade and diplomacy, and to find refuge. It’s likely that other communities had important relations with this place, too. The homogenizing colonial violence of intentional erasure has displaced and destroyed accessible knowledge of their participation. We will continue to update this page as we discover more.

Forced Removal, and Those Who Remained

The specific location of the Wild Abundance campus was guaranteed to the Cherokee Nation first through the illegitimately negotiated treaty of Holston in 1771 (too few Cherokees were present and engaged with the process for it to be legitimate, based both on their own and the U.S. systems of governance). This treaty was subsequently broken and followed by several other similarly spurious treaties that eroded Cherokee landholding. The sustained attack on Cherokee territory culminated in the 1835 Treaty of Echota that marked the near complete removal of Cherokee people from their traditional homelands, and the beginning of the Trail of Tears.

A group of about 800 Cherokee people managed to remain in the mountains in hiding, resisting forced removal and genocide on the Trail of Tears. This group and their descendents were eventually able to purchase some of their traditional land back from the U.S. Government. Now, they make up the 13,000 members of the Eastern Band of Cherokee Indians, the largest Federally Recognized tribe east of the Mississippi. Today, the Eastern Band of Cherokee Indians are our closest neighboring Tribal Nation living on tribally held land.

Other-Than-Human Relatives Whose Home We Occupy

The rich cove forest where Wild Abundance is located is home to an incredible diversity of plants, animals, fungi, and other living relatives. Here, cool wild water bubbles from within the dark bellies of mountains. These myriad springs come together to form the creeks and rivers that carve fertile and flattish valleys in the craggy landscape. Trout, crawfish, snails, dozens of species of salamanders, and others reside in these waterways. Many creatures come to their edges to drink: bear, coyote, possum, raccoon, deer, weasel, bobcat, mouse, woodrat, myriad birds, and more.

Shade is cast on the earth below by dozens of tree species—oaks, hemlock, ash, hickory, tulip poplar, pine, sourwood, basswood, dogwood, sycamore, buckeye, maples, and others— whose roots help to hold the thin but rich soil against the rocky ground. A colorful, magical diversity of fungi assist in this soil-building process, and weave the roots of plants together in a tapestry of wisdom and sharing. 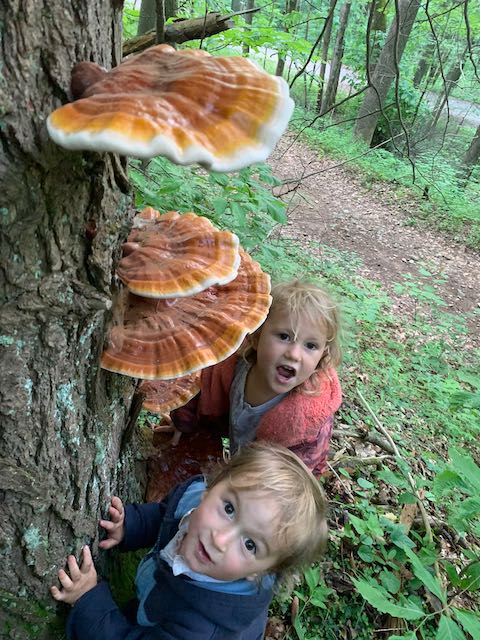 Abundant tulip poplar trees drip nectar that feeds native pollinators, and their bark has been used for cordage and home-building. Several species of oak share acorns in the fall that feed deer, squirrels, bear, and have fed generations of humans.

These so-called “rich cove forests” create sanctuary-homes for hundreds of plant species, including important food and medicine allies for the original stewards and current occupants: Ginseng appears and disappears mischievously on the forest floor; angelica blooms with delicate fragrance; black and blue cohosh slowly build healing root masses season after season; sochan announces the coming of spring with their nourishing green leaf rosettes; reishi bring a new kind of life to dying hemlock trees and so many more feed, adorn, mystify and teach the dwellers of these woods.

These are just a few examples of the infinite, long-lived relationships among the other-than-human members of the community here.

Non-Native Peoples of This Place

The white settlers who initially came to the mountains in the late 1700’s and early 1800’s were primarily of English, Scotch-Irish, and German descent. They came to buy, settle, and farm the cheap, fertile bottomlands and hillsides in this region that had been stolen from the Cherokee and other Native people.

Contrary to popular belief, many of these white immigrants owned enslaved African people, who also became a significant portion of the population: over 10% starting in the mid 1800s and continuing today. Here in Buncombe county, some wealthy white families owned over 100 enslaved people, while more “middle-class” families may have owned only a handful of them. It’s true that the poorest white families in the region could not afford, and therefore did not buy other human beings.  Some Cherokee people also participated in slavery as enslavers. In fact, they were the tribal nation to own the highest number of enslaved people in the country, by the end of slavery.

Black/African American people have played important roles in the culture and unfolding stories of this place for as long as white settlers have.

Today, people of many different racial and ethnic identities, along with nationalities, make this place home, including descendants of the original stewards, settlers, and those brought here as slaves.

With this brief acknowledgement of some of the layers that form the ground we stand upon, we hope to more honestly embody our full humanity; and we invite you to hold the beautiful, painful complexity of place with integrity and care.

Forever Free: Slave Deeds of Buncombe County, NC Documentary about the role of the registrar of deeds in providing awareness and work toward accountability for the violence of slavery, including details of the life of Sarah Gudger, who provided the only eye-witness account of being enslaved in Buncombe County.

Black in Appalachia – A research and public engagement organization that works to highlight the history and contributions of African-Americans in the development of the Mountain South and its culture.

Settlement of the Mountains: 1775-1838 – Historical overview of the “settlement” of the mountains of what’s now called Western North Carolina.

Indian Country Today – A voice of indigenous peoples throughout the Americas.

All My Relations Podcast – A podcast exploring what it means to be a Native person today, including relationships to place, people, non-human relatives, and ourselves.

Vision Maker Media – With a mission of empowering and engaging Native people to share stories. We envision a world changed and healed by understanding Native stories and the public conversations they generate

Rematriation Magazine – A multi-media initiative engaging in film production, digital content creation and community engagement. We continue to re-imagine the ways in which a “magazine” can shift narratives, defy stereotypes, and reflect our own experiences.

Indigenous Environmental Network – An alliance of Indigenous Peoples whose shared mission is to protect the sacredness of Earth Mother from contamination & exploitation by respecting and adhering to Indigenous Knowledge and Natural Law.